January 2021 will mark the transition to the Biden administration and with it former Chair of the Federal Reserve Janet Yellen as Biden’s nominee for Secretary of the Treasury. With any change in power, there are positives and negatives that need to be considered as the information we have in making investment decisions and managing risk evolves. Since this transition occurs in the midst of the coronavirus pandemic, it will also have implications for those states that are struggling to balance their budgets while keeping their economies growing.

Both Republicans and Democrats have come together this year to quickly direct aid packages to Americans negatively impacted by the pandemic. However, there are some differences of opinion when it comes to aid for states that have not been fiscally responsible prior to the pandemic. The debates between opinions could go on and on, and we have no opinions or political stance. We can, however, objectively look at what the likely nomination of Yellen as Secretary of the Treasury would mean for further coronavirus aid, and how this new information could impact our outlooks and decision making.

Policymakers struggled with finalizing the relief package before funding lapsed, which included more aid to small businesses, direct payments, and additional unemployment supplements for those Americans that remain impacted by the pandemic. We think this aid package is crucial to the U.S. economy’s wellbeing until vaccinations become widespread enough to allow some normalcy to return. Importantly, policy makers on both political sides seemingly understand the urgency. In its current form, Secretary of the Treasury Mnuchin needed a plan that could get bipartisan support. In many respects, Mnuchin’s plan is appealing to both parties, however, there has been less support on the Republican side for state aid and, when passed, this final round of aid in 2020 will likely not include much for states. Many mismanaged states stand to benefit from relief and some policymakers want to ensure that any aid to states compensates them from the consequences of the pandemic and not from prior fiscal irresponsibility.

Moving forward, the new Treasury Secretary will play an important role and may determine if meaningful aid to states will materialize. With the current nominee for Treasury Secretary, Janet Yellen, it seems the stars are aligned for states to get support in a meaningful way. If Yellen is confirmed, we expect to see a bigger push for state support. Yellen has been a big advocate for both fiscal and monetary policy to battle coronavirus. She is also a big supporter of aid packages for state governments that have taken revenue hits and are being forced to balance their budgets in this difficult time as state spending and employment are big economic drivers. Additionally, she has voiced concern over the safety of communities being compromised due to decreased revenues. As Treasury Secretary, we think Yellen would be in a role to propose and broker a deal that could bail the states out and prop up the economy even further. Additionally, she will have a meaningful influence over other areas such as bank regulation, fiscal policy, and trade.

Overall, we see Yellen as a positive step forward in the battle against the coronavirus and believe she will follow through on getting more aid until there is widespread delivery and adoption of a vaccine to allow somewhat of a return to normal. In addition to being a large employer, states and local governments are a major factor to the overall economy and recovery since they make up a healthy portion of GDP. State and local governments are also large employers and depend on tax revenue, which has declined this year due to shutdowns (exhibits 1 and 2). As an advocate for deficit spending during economic crisis, Yellen had previously supported funding of state and local projects during the financial crisis bailout. 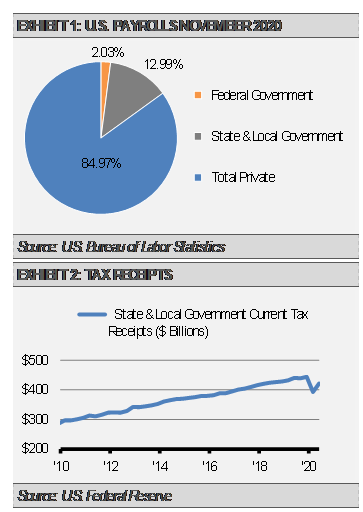 We think the confirmation of Janet Yellen as Secretary of the Treasury will be good for economic growth in the near-term as we continue to navigate the pandemic. However, her positioning is more complicated during non-crisis environments since she has previously advocated for balanced budgets, higher taxes, and cuts to spending. These are views that may worry some market participants over the longer-term now that she could be taking on the influential role of Secretary of the Treasury.