Back in 2014 I wrote a series of interviews that were published by ETF.com called Structure Matters. This series highlighted ETFs and experts as a source of information. Recently, a great deal has been written about Bond ETF discounts including our own research pieces back on March 16th and March 18th as well as a series of articles by Dave Nadig.

In the ETF Think Tank we continue the thesis that ETFs are a source of information, but more on a one-on-one basis. Recently, I sat down with Michael DePalma and Michael Ning who are the Portfolio Manager’s for the High Yield ETF (HYLD) to get their take on what has happened in the markets. Prior to becoming ETF Entrepreneur’s they’ve both held various positions in fixed income portfolio management and research over the past 25 years. See LinkedIn Bio’s for details: https://www.linkedin.com/in/michael-depalma-1ab3944/  https://www.linkedin.com/in/michael-ning-02a61b18/

Dan Weiskopf: We don’t know what is ahead of us with regard to the economy. Markets have declined dramatically because of default risk and liquidity concerns. You have written about how your process works in the face of business cycles. How have you positioned the portfolio?

DePalma/Ning: Since the outbreak of the coronavirus began, our Market Cycle Indicator (MCI), a proprietary model which seeks to measure financial conditions and the environment for credit creation, experienced a record collapse (chart), indicating that aggregate credit growth in the economy has declined dramatically. The markets clearly entered a contraction phase.

While the selloff in high-yield bonds has pushed the average spread to over 1100bps according to the Bloomberg Barclays US High Yield Index, in this fluid and uncertain environment, this level may not yet compensate investors enough for potential losses from defaults. Ongoing virus mitigation policies have resulted in a massive deterioration, and in some cases a complete halt, to cash flows for many businesses. A more lasting pullback in economic activity would likely lead to a more significant increase in defaults. S&P Global Ratings is forecasting that the default rate for high-yield debt will be 10% over the next year.

Consequently, in HYLD we have been accumulating cash over the past several months from near zero to almost 10% of the portfolio. In addition, the average maturity on HYLD is almost two years shorter than the Bloomberg Barclay’s US High Yield Bond Index. These are the primary reasons the portfolio has outperformed YTD on a NAV basis, despite having higher exposure to lower-quality bonds.

Dan Weiskopf: How has the market accessed the value of the bonds held in your portfolio?

DePalma/Ning:  For the year-to-date, the average credit spread of the bonds held in our portfolio widened significantly. However, on average, we outperformed the broad market in every credit rating bucket. The drag in our portfolio has been that we have an overweight in single-B bonds, which we hold in order to maintain our dividend. 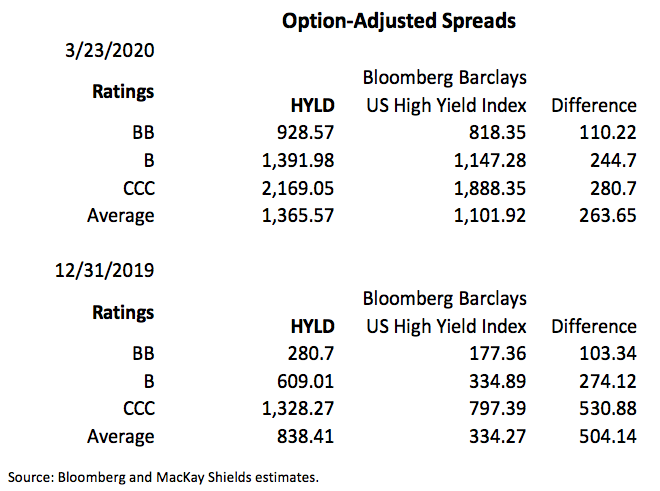 Dan Weiskopf: What are the long term implications of the government’s response to the situation?

DePalma/Ning:  Seems pretty clear that spending and business investment will suffer for at least a few quarters. That means business profits will decline significantly and the unemployment rate will rise.  Without government assistance, companies and individuals will begin defaulting on their debt on a very large scale.  In that scenario, the banking sector, despite being in better shape today than in 2008, would likely begin to experience   a crisis and reign in credit.  After the meeting with the president last week many of the banking executives said they were well capitalized and ready to help, but it’s doubtful they anticipated the potential severity of a crisis of this sort, especially one with a horizon that is impossible to gauge.

What we think is needed is a wartime response. Here is an extreme response: US GDP is $21 trillion and debt to GDP is 106%. If the government spends 100% of GDP to support the economy, loans to business and individuals (many of which won’t be paid back) you would have debt to GDP of 212%.  That is still below where the Japanese have operated for over a decade.  This would be expensive but it’s a price we might have to pay.  In reality, the bill might be a fraction of that.  Sure this would balloon the deficit, but not doing it would balloon the deficit too, through less tax revenue and support programs for healthcare, unemployment insurance, etc. The Fed would pitch in as well, and they have already done so.  From 2008 and 2014 the balance sheet grew from $900 billion to $4.5 trillion before starting to decline (and now it’s back up to $4.5 trillion, even more given the last few days).  This is a 5x increase. This did not cause the inflation many feared so why wouldn’t they do that again.  Take it to $20 trillion, another 5 times!  Just as on the fiscal side, they probably won’t need that much and even if it does cause inflation to rise, so be it. Inflation is preferable to deflation, which would result in many defaults and much higher unemployment. They could expand what they buy to support markets and as soon as they do investors will begin to come back to markets. If asset prices rise again it will mitigate or reverse the punishing wealth effects we would otherwise see.

This material contains the opinions of certain professionals at MacKay Shields, but not necessarily those of MacKay Shields LLC. The opinions expressed herein are subject to change without notice. This material is distributed for informational purposes only. Forecasts, estimates, and opinions contained herein should not be considered as investment advice or a recommendation of any particular security, strategy or investment product. Information contained herein has been obtained from sources believed to be reliable, but not guaranteed. Any forward-looking statements speak only as of the date they are made and MacKay Shields assumes no duty and does not undertake to update forward-looking statements.