A parabolic market upswing in early June was interrupted by a 5.8% plunge on June 11th, and the market has traded in a tight range since then, with the S&P 500 up 2% overall in June. Still, the market posted its biggest quarterly gain since 1998 with 22.6%, and it is now only 3% below its Dec-31st level – a remarkable feat considering the economic reality. 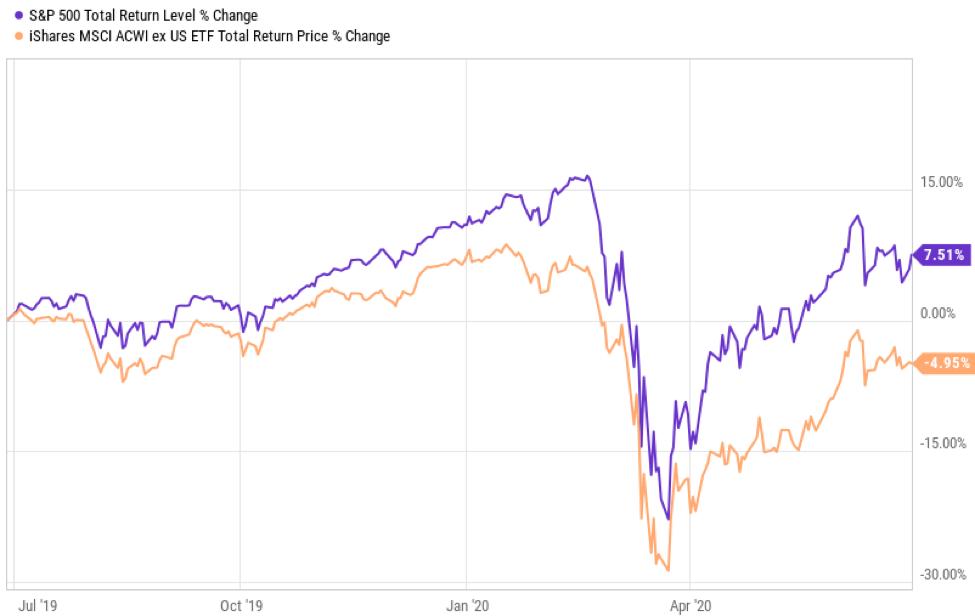 The disconnect between the market and fundamentals remarkably large. I have covered this in detail in my recent articles, – so I’ll offer just a brief recap today. We’re now in a recession that, oddly, began in January even though the pandemic-related lockdowns began in late February. The IMF now expects an 8% cumulative contraction in US GDP this year. If true, it will be double the size of the 2007-09 recession. See Economic Focus below for details.

It’s now clear that the rally was propelled by monetary stimulus – some of the stimulus checks were funneled into the stock market. We don’t know exactly how much, but because the total stimulus was close to $3 trillion, it created a massive new source of short-term demand for stocks. In my view it’s running its course, unless a new round of stimulus is approved.

Quarterly earnings reporting will begin in two weeks. S&P 500 earnings are expected to drop by 44% year-over-year, according to Factset – the largest decline since Q4 2008. This drop is likely understated because many companies have not issued guidance at all (an exception to the SEC rule made for Q2 due to the pandemic). In a “let’s not talk about it” environment, only 49 of the S&P 500 companies issued guidance, less than half of the five-year average of 106.

The S&P 500 price-to-earnings ratio using trailing 12-months operating earnings is 22. It was last at that level in 2017, and before that in 2002. Here’s a good chart by Factset showing that the disconnect between the index and its estimated forward 12-months earnings (which are probably overstated) is the largest in at least ten years: 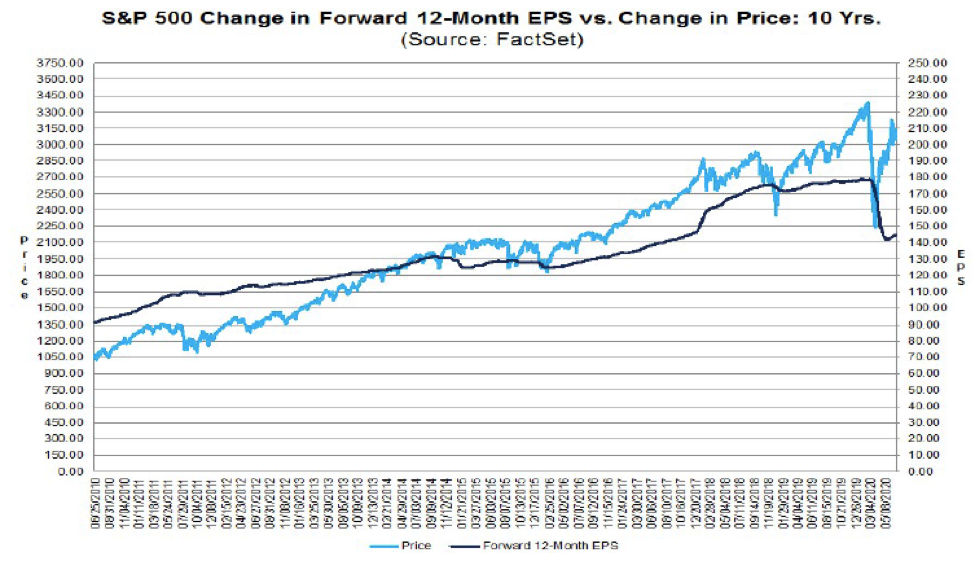 Our 6-month equity model continues to project a double-digit drop in the S&P 500 of ‑13.6% on negative economic numbers. When the forecast is significantly negative, below -5%, we would always be defensive. In addition, our Short-Term Risk model gave a Sell signal on June 11th. This model has worked very well over the past two years. Even if fundamentals matter less to the market due to the Fed’s actions, we expect this model (which is based on market dynamics) to continue to work well as part of our process.

Our equity model’s most negative and positive factors are shown below in historical context (assuming their current weights). After its largest monthly decline on record in April, the University of Michigan’s Consumer Sentiment index rebounded somewhat in the past two months to 78.9. Still, this factor continues to be the most negative in the model with a -8.3% contribution: 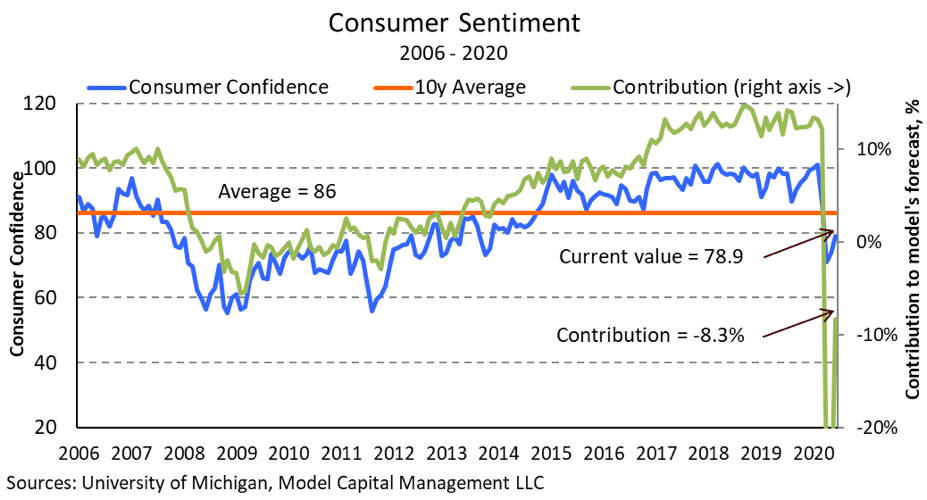 Investor sentiment measured by the American Association of Individual Investors’ (AAII) survey turned bearish again in the second half of June on increased market volatility. The bears-to-bulls ratio rose to 1.7, and the effect of this contrary factor at 2.9% remains the most positive factor in the model.

With May and partial June data available, we now have some visibility into the magnitude of the current recession. The recession began in January, oddly enough, even though the pandemic-related lockdowns began in the US in late February. The IMF now expects an 8% cumulative contraction in US GDP this year. If true, this will be the largest downturn since 1946, double the size of the 2007-09 crisis when US GDP contracted by a cumulative 4%.

The magnitude of monthly changes is enormous as the economy ground to a halt in April and May. There are some bright spots – for example, retail sales jumped by 16.8% in May from the previous month. It appears that Congress and the Fed were successful in boosting spending via stimulus checks. But most data remain terrible. Consumer sentiment – which leads spending – remains low at 78 (see chart) after the largest ever monthly drop in April. 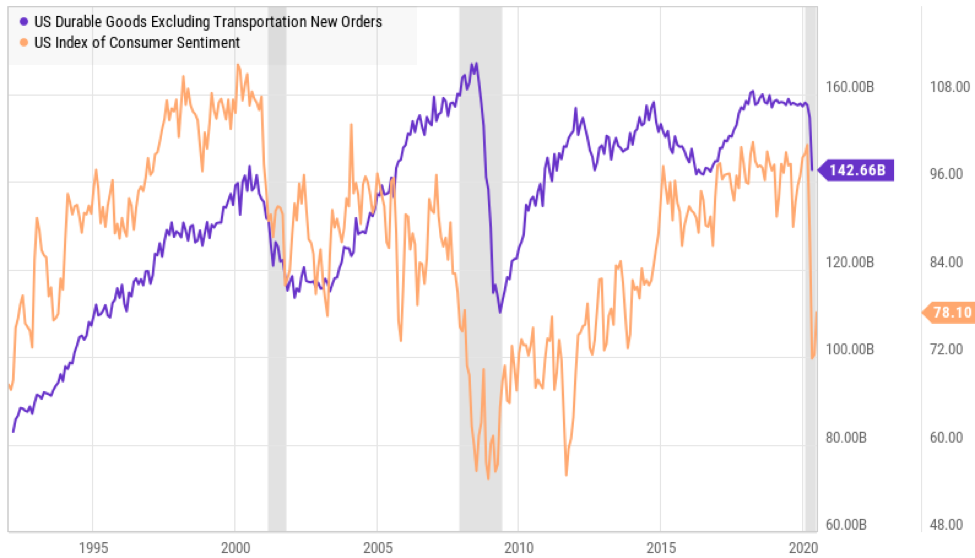 May non-farm payrolls were exceptionally strong – 2.5 million jobs added, compared with consensus expectations of a 9 million loss. The unemployment rate fell to 13.3% (see chart below) from 14.7% in April, also defying economists’ expectations, but remains its highest since at least 1947. Weekly claims for unemployment benefits, although receding, continued at a historically massive level of 1.5 million last week.

Model Capital Management LLC (“MCM”) is an independent SEC-registered investment advisor, and is based in Wellesley, Massachusetts. Utilizing its fundamental, forward-looking approach to asset allocation, MCM provides asset management services that help other advisors implement its dynamic investment strategies designed to reduce significant downside risk. MCM is available to advisors on AssetMark, Envestnet, and other SMA/UMA platforms, but is not affiliated with those firms.