Both the historical costs, as well as the history itself, may surprise.

For 34 years, the American Farm Bureau has released an annual survey of the total cost of the items that make up a classic Thanksgiving Dinner for 10 people. This year the full meal tally came in at $48.91, which is essentially unchanged at only one penny higher than last year’s result of $48.90, and after three years of price declines since 2015. The cost of a Thanksgiving dinner remains less than $5 per person and lower than it was back in 2012.

To determine the price of the dinner, the Farm Bureau uses 250 volunteer shoppers who have checked prices in 38 states to look for the best possible prices without taking advantage of any special promotions. 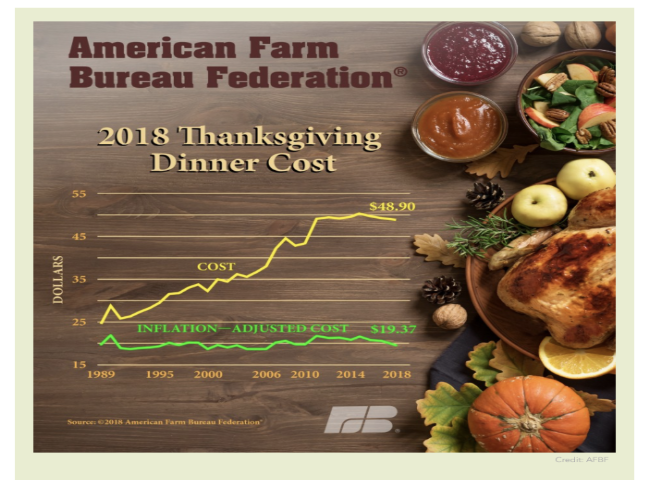 The shopping list for the Farm Bureau’s survey includes the turkey in addition to stuffing, sweet potatoes, rolls with butter, peas, cranberries, a veggie tray, pumpkin pie with whipped cream, and coffee and milk in quantities to serve 10 people with plenty of leftovers.

Some of this year’s survey results indicated that – 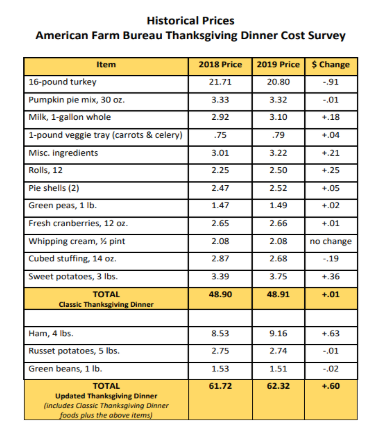 Happy Thanksgiving to everyone from all of us at Main Management!

Cohesion from Crisis? Adding to Europe A Biden Election Victory – What It Might Mean for Investors Signs for a Sustainable Recovery A Perfect Storm for ESG Investing Smart points made here by @MstarETFUS on the pros ... and cons of active non-transparent #ETFs (or ANTs). As he notes, they're likely to be more tax-efficient than #MutualFunds, but the jury is still out on how they compare to traditional ETFs https://www.morningstar.com/articles/993801/active-non-transparent-etfs-what-are-they-good-for

Join us with 50% off Platinum Plan and learn to ... trade the Technical Market & Blue Boxes, which most of the time create a reaction. https://elliottwave-forecast.com/subscriptions/ For a Limited Time Only #Elliottwave #Forex #Indices #Stocks #ETFs #SPX #Oil #Gold #EURUSD #AAPL #AMD

Our analytical team provides fundamental and ... forensic forward looking views of many widely held stocks in #ETFs such as $XLY $SPY $VB. This video featuring two of @cfraresearch consumer analysts on $UAA gives a glimpse into the depth of that research.