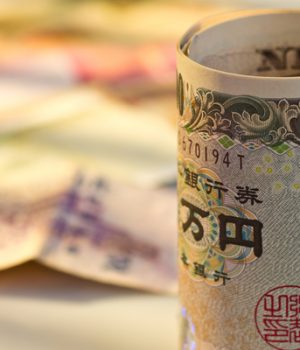 ETF Trends CEO Tom Lydon discussed the WisdomTree Japan Hedged SmallCap Equity Fund (DXJS A-) on this week’s “ETF of the Week” podcast with Chuck Jaffe on the MoneyLife Show.

WisdomTree Japan Hedged SmallCap Equity Fund seeks to provide exposure to the small-cap segment of the Japanese equity market while hedging exposure to fluctuations between the U.S. dollar and the yen.

There has been a currency-hedged play to tap into a rebounding Japanese economy. This has been done to gain exposure to Japan’s local markets without worrying about potential foreign exchange currency risks in case of a weakening yen currency or stronger U.S. dollar. In turn, this neutralizes exposure to fluctuations of the Japanese Yen movements relative to the U.S. dollar.

A weak yen means lower returns in non-hedged ETFs where their converted USD-dollar denominated returns are lowered. It also means improved competitive pricing on Japanese exports, which continue to make up a significant chunk of the Japanese economy.

The Japanese Topix index closed above the 2,000 point level for the first time since May 1991 after automakers and lenders bolstered the gauge’s gains this month. To put the gains in perspective, the Topix has more than doubled the broader MSCI Asia Pacific Index returns so far in 2021.

Finding support from the ‘unexpectedly dovish’ signals from the Federal Reserve, Japan’s decision to lift the Coronavirus state of emergency, and progress being made on vaccinations, along with the recovery in corporate earnings.

As Coronavirus cases abate, Japan ended a state of emergency for the Tokyo region on Sunday. With infections under control, the island nation will not have to impose the economically damaging restrictions experienced in other countries. The recent shutdowns also came with less economic damage than the first state of emergency, now declared almost a year ago.

The recent Fed decision adds to pressure on the BOJ to maintain a very dovish stance. The Bank of Japan slightly loosened its grip on long-term interest rates on Friday and laid the groundwork to taper its huge asset purchases as part of steps to make its stimulus sustainable enough to weather a prolonged battle to fire up inflation. Japan still faces difficulties in fighting deflation, not inflation.

The central bank said it might lower its short-term interest rate to minus 0.2% or further from minus 0.1% now, and it laid out a path for doing so without hitting commercial banks’ profitability. BOJ dropped the 6 trillion yen stock purchasing target but reiterated it was ready to step in with larger purchases if needed. It said the higher purchase limit, previously described as a temporary pandemic response, would continue even after the pandemic subsides.

Listen to the full podcast episode on the DXJS: