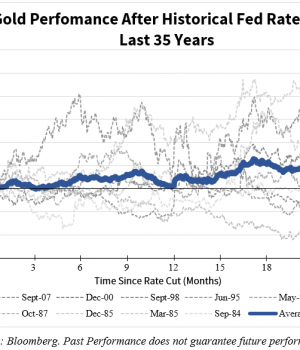 If you thought the Fed was supposed to be the adult in the room, think again.  While the task of party chaperone is never easy, it gets infinitely harder when dealing with toddler-like equity markets, who demand extra coddling while threatening bad behavior.  Against this backdrop, Fed Chair Jerome Powell has strongly indicated interest rate cuts are imminent, all to placate markets at record highs.

The classic truism of the Fed’s responsibilities
is to take away the punch bowl just as the party gets going, as attributed to
the late Fed Chair William Martin.  Powell however seems to be taking the opposite
approach, doling out the punch and ensuring all partygoers get their share,
well after dancing has already been under way!

After all, unemployment at 3.7% represents a
50-year low, and the 10-year is only 50 bps above its all-time low. How are we
to make sense of this apparent discrepancy, and more significantly, how should
be position ourselves strategically?  How
can I go defensive without also “fighting the Fed?”

High
on His Own (Monetary) Supply…

Patently obvious is that we have
come a long way from the “autopilot” remarks of last December.  While Greenspan was notorious for his ambiguous
Fedspeak, not even he could interpret transitioning from continued hikes, to
pausing, to promising cuts as consistent with a Fed on autopilot.

Hindsight has revealed the past
seven months to be a crucial turning point in macroeconomic history, revealing
the high-water mark beyond which interest rates may be raised no further.  While the market has for the past few months
suspected rate cuts were probable—as early as January 3rd 2019 a cut
was priced as more likely than a hike—Powell’s testimony all but sanctified the
impend cuts.

In particular, traders interpreted
his economic commentary couched in terms of “muted” inflation concerns and global
“crosscurrents” as code for softer policy.
That he singled out the strong June jobs report as not altering
his view of the economy exemplified not only his commitment to lower rates, but
it also removed the market’s largest concern going into his testimony.

More significant than the immediate
implications for a July cut, however, was how Powell’s testimony presented a
real rupture with how the Fed has traditionally viewed the U.S. economy.  Specifically, Powell described a new idealization
of the economy in its steady state, where several key parameters have diverged
from historical norms.  Importantly, the
Fed Chair articulated the natural rate of unemployment, and the level of
neutral interest rates, are now both lower than previously believed.

This statement signifies a marked
departure from Powell’s December remarks, where he maintained that after the
latest hike the federal funds rate was starting to enter the lower bounds
neutral territory. In others, back in December we were not yet at neutral
rates, but fast forward to this July and we now have to ease to get back
to neutral.  If it seems we have come
full circle, never mind the 224,000 non-farm payroll number, the Fed appears to
be fully committed to this Back to the Future mentality.

This development is striking, as it
signifies the Fed has fundamentally reevaluated core dynamics to the U.S.
economy, quite suddenly as well.
Buttressing his view for lower structural unemployment rates, Powell
cited a 20-year breakdown in the classic linkage between unemployment and
inflation, that higher employment is not accelerating inflation.  Given this perspective, it is not surprising
Powell dismisses the strength of the June jobs report, as the Fed has adopted a
new macroeconomic framework to guide U.S. monetary policy.

More significant than the immediate implications for a July cut, however, was how Powell’s testimony presented a real rupture with how the Fed has traditionally viewed the U.S. economy.

To his credit, Powell was quite
honest in this admission, even carrying this line of thought to its logical,
indeed climatic, conclusion.  The grand
realization is that if the neutral interest rate is lower than previously
supposed, then rates can be reduced without being considered “accommodative,”
and importantly, maintained at those levels.  Much of the Fed discussion has been framed
within the context of insurance cuts à la ’95 and ’98, but Powell’s
comments suggest a fundamental paradigm shift.

Rather than providing temporary
relief, these new Fed revelations raise the potential for lower rates over the
long term, if indeed that is where the neutral rate lies. In other words, the
Fed may have expanded the scope and timeline over which cuts may be sustained.
The prospect of more dovish monetary policy over the long run may historically
favor a risk-on dynamic, but with equities at all time highs such posturing in
late cycle may be ill considered. This about-face on part of the Fed presents a
true dilemma for investors.

It may have come to the point where investors’ biggest forward-facing risk is not market risk, credit risk or even cycle risk, but instead Powell risk.

As a potential solution to this
conundrum, gold may be well positioned as an asset class.  As the diagram above depicts, gold’s status
as a hybrid commodity-currency has historically benefited from softer monetary
policy.  Since gold decoupled from the
dollar in 1971, gold has appreciated by an average of 14.5% in the two year
period following a rate cut by the Fed.  For those who believe recent data carry more
weight, the last three rate cut cycles saw gold rally an average of 20.3% over
the subsequent two years.

Intuitively, this outcome stems
from the reduced carrying costs and weaker dollar that dovish policy
implies.  Additionally, gold’s
non-correlative properties may enable investors to potentially take some market
risk off the while still positioning themselves for an accommodative Fed.

The Powell Fed has behaved and
communicated in decidedly unorthodox, if not outright bizarre fashion, moving
equity and bond markets in its wake. It may have come to the point where investors
biggest forward-facing risk is not market risk, credit risk or even cycle risk,
but instead Powell risk.  Unfortunately,
this may be the hardest risk of all to understand, much less hedge.

newETFs.io respects the hard work of others and gives all credit to the remarkable folks at GraniteShares-Research. This excerpt/article was pulled from their RSS feed; click here to view the original. Please note that on occasion, the RSS feed will not have the author. When this happens this site defaults the author to "News". Make no mistake, this excerpt/article was not created by newETFs.io, it was simply shared with you.